My good friends at PangeaSeed are embarking on an awesome project that aims to get artists into the sea and spread awareness of our dying oceans by creating murals. The project is one of PangeaSeed’s biggest yet and I am absolutely exuberant to see this project come to fruition. More info on the project below:

Sea Walls: Murals for Oceans is a ground-breaking street art project created by PangeaSeed to bring the beauty and the plight of the world’s oceans into streets around the globe. By collaborating with internationally renowned artists, we create large-scale murals that focus attention on pressing environmental issues the oceans are facing.

In collaboration with our friends at 1xRUN we are embarking on our biggest Sea Walls project yet. We’ve invited some of today’s biggest names in contemporary street art to join us on our first-ever Sea Walls expedition.

The mission of the expedition is to offer these artists the opportunity to swim with and study endangered whale sharks and oceanic manta rays off the coast of the island of Isla Mujeres, Mexico from July 20-28, 2014. Inspired by their interactions with these majestic giants in the wild, the artists will create a series of large-scale public murals on the island to help educate and raise greatly needed awareness within the local and tourist communities for the plight of these animals and the oceans. The murals will also highlight the benefits of ecotourism and long-term sustainability of natural resources.

Sea Walls: Murals for Oceans is a new approach to ocean conservation, marrying art and activism. The Sea Walls expedition will make a large impact and gain global media attention – with your help.

Visit their Indiegogo site to contribute to the project and for more info!

“In Dreams” A David Lynch Artshow

Spoke Art is well known for it’s amazing themed shows. This March they will be hosting an exhibition themed around the work of David Lynch. I am excited to have been asked to be a part of this show and humbled to be included among such an amazing cast of artists. More info about the show itself follows:

Spoke Art is proud to announce our first ever David Lynch- inspired art exhibition, In Dreams. The show features a dynamic range of artwork influenced by the prolific and innovative films of director David Lynch. Comprised of over 50 artists from around the globe, each of the exhibited works evoke the emotional complexities and stylistic ventures of Lynch’s work through a variety of mediums, such as painting, sculptures and limited edition fine art prints.

Often defying the conventions of filmmaking, the films of David Lynch feature all-too-familiar worlds that, beneath their vibrant exteriors, guard unthinkable secrets. From the desolate and disturbing darkness of Eraserhead (1977) to the unspoken evils of a small town in the cult classic TV series Twin Peaks (1990), In Dreams presents a closer look into the unsettling, yet hypnotizing realm of Lynch’s cinematic repertoire

And without further ado, I created a piece called “Henry Spencer”. It is a three color screenprint (all metallic), 18×24: 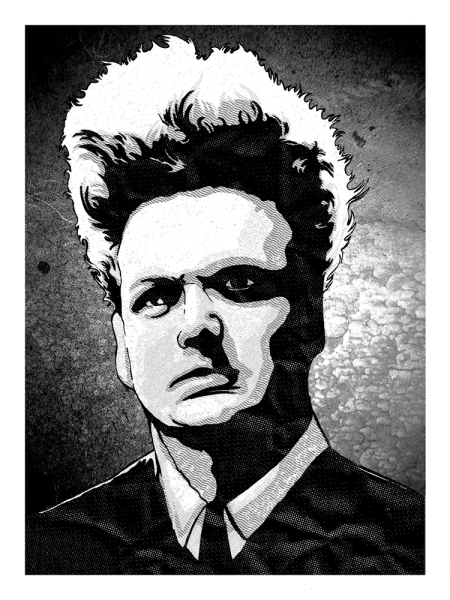 Online sales begin on Monday, March 10 –  so head on over to Spoke Art

Do You Know Your Chicken?

If there’s one thing in this world that I know it is chickens. Because of my awareness of such I am absolutely ecstatic to reveal this poster that I was honored to do for Cibo Matto’s performance at The Crocodile in Seattle, WA. This band is an all time favorite of mine so it is difficult for me to hold back my glee. These will be available at my booth during Flatstock in Austin next week at the Convention Center and soon will be available on Nakatomi. Without further ado here is my latest print:

Clintprints is excited to be a part of the gallery exhibit titled “Toy Stories”. I was asked to both create a limited edition screenprint based around my favorite childhood toy AND work out sketches that would be turned into a toy based on my screenprinted work. The amazing 3D artist JC Rivera collaborated with Galerie F and some participating artists to flesh out the toys based on the work of the artists involved in the print exhibit. I am thrilled to share that JC has been hard at work recreating my “Toulouse” character. Below is a peek at the work that Clintprints will have in the exhibit: 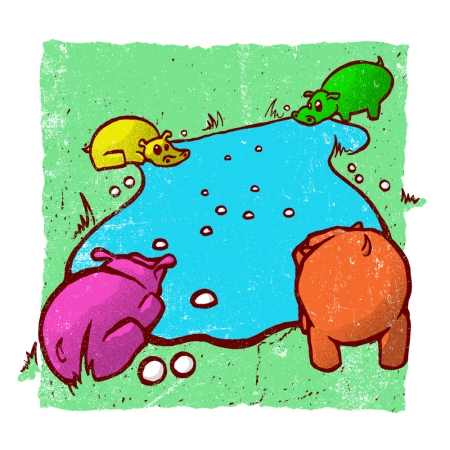 “Grazing” is a 12×12 screenprint. Visit Galerie F for information on purchasing

“Toulouse” in the flesh! Below is more information on the show itselft:

Clintprints will be participating in this year’s show within the Le Guess Who? festival called Le Gigposter? There are many amazing artists that will be exhibited during the festival and Clintprints is excited to be a part of this awesome show in Ultrect, NL. For more infor read below:

Make sure to drop by at Kargadoor during Le Guess Who? for an exhibition of gorgeous silkscreen concert posters from around the world. As an initiative by Utrecht silkscreen artist Joris Diks (Handprinted Stuff), more than 35 silkscreen artists will be on display from November 28 – December 1. All posters are original contemporary pieces of art, created in collaboration with the musicians and concert halls they depict. Naturally, there will be a selection of limited edition Le Guess Who? 2013 silkscreen posters for sale as well!

All the posters are original contemporary pieces of art, created in collaboration with the musicians and concert halls they depict. Most of the posters are for sale, so grab this unique chance to get a signed limited edition silkscreen of your favourite band or artist!

Clintprints will be exhibiting in Rome in November! The house of architecture will be hosting a screenprinted poster exhibition called Posters Rock! on November 23rd and 24th. The building is absolutely gorgeous and will feature the works of many world renowned artists. Clintprints will feature several prints as well as a couple of process videos that will help to give the Italian audience an idea of what goes into making a rock poster. Here is a little more information about the show:

Clintprints is proud to present a new limited edition poster for an art exhibit in Los Angeles titled “Smile, You Son of a Bitch! This exhibition is essentially a Jaws tribute. We, here at Clintprints, have decided to focus on the great white shark and its beauty and awe. This misrepresented creature is rather magnificent. So, without further ado, I present “Benevolent Miscreant”:

Benevolent Miscreant
16×20
Limited Screenprinted edition of 75
These will be available to purchase at the gallery and will eventually make it to Nakatomi and Part and Labor in Austin, TX.
Here is more info on the art show: